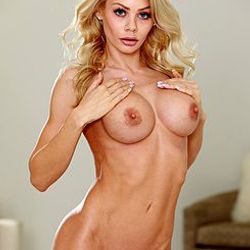 Riley Steele™ is a beautiful, blonde force to be reckoned with. Riley is bubbly, enthusiastic, and full of life. These amazing qualities shine through the moment you meet her. Born and raised in San Diego, California, Riley Steele™ spent her days either on the beach or in an ice rink practicing her love of figure skating. Her dedication paid off, resulting in a toned and conditioned body.Riley took her first step when she went to Hustler Hollywood™ to meet Jesse Jane® during an appearance promoting the release of Digital Playground™'s blockbuster "Pirates". Taken by her wholesome good looks and killer body, Jesse told her that she had everything it takes to be a star. Riley took a business card and continued to ponder making her fantasies realities. After a couple of years, Riley pulled out the business card and called Digital Playground™.With fresh ink on an exclusive contract, Riley Steele™ had the pleasure of meeting Jesse Jane® again. This time, it was on the set of the blockbuster "Pirates II: Stagnetti 's Revenge", where they were co-stars. With Digital Playground™ behind her all the way, Riley has gone on to make dozens of movies including: Top Guns, Body Heat, Fly Girls, Nurses, The Masseuse, Strip for Me, Bar Pussy, Love Fool, Teenlicious, Strict Machine, So Fine, Honey, Perfect Pet and Scream.Mainstream movie goers fell in love with Riley when she landed a role in the 2010 summer hit "Piranha 3-D" directed by Alexandre Aja. Always humble, Riley thought she blew the audition. However, the producers saw a beautiful girl full of potential and cast her as Crystal. Aja was heard saying one of Riley's underwater scenes was the most spectacular scene he's ever filmed. Riley appeared alongside Hollywood stars Elisabeth Shue, Richard Dreyfuss, Jerry O'Connell, Ving Rhames, Adam Scott and Dina Meyer. In 2011, Riley won the AVN Crossover Star of the Year Award, the XBIZ Crossover Star of the Year Award and the XRCO Crossover Star of the Year Award. She was named XCritic's Must See Girl of the Month for January 2011 and is the #1 ranked Adult Superstar on IMDB. Riley also co-hosted the 2011 AVN Awards Show and was a darling of the red carpet.Riley has also appeared on the covers of many top magazines including: Hustler, Club, High Society, Cheri and Gore Zone. For a more exclusive look at Riley, check out www.rileysteelexxx.com.