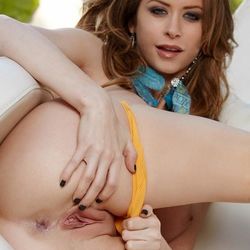 Jessica Drake is an American actress and model performing primarily in the adult entertainment industry. She is reported to have been born in Los Angeles. It's been reported that she actually got a degree from the Juilliard School Of Drama and actually won some awards there. Her academic accolades are quite extensive having been associated with schools such as UCLA, The American Academy Of Dramatic ARt, Cal Arts, LACC Theater Academy and more. She is approximately 5 feet 8 inches tall, weighs in at 110 lbs and measures 34C 25 35. She has brown eyes and blonde hair. You can see her starring or featured in the following popular porn movies such as Kirsten Tonight, The Alibi, 2040, Hush, Lies, Revenge Inc. and more.